Another chapter of the 2017 borders cross country series ticked past today. In fabulous cold winter sunshine Dunbar hosted the 2nd race of the season on the beautiful white sands at Dunbar. Run on sands and the grassed over dunes this is virtually a weather proof course. The only extra challenge today was the head wind on the return leg of the 1 lap course. 220 cold, sun-tanned heros started a course made for sustained pace - unlike Lauder, there is plenty of room on the course to pass folks. The senior race was again dominated by Eion Lennon of Carnethy - but here only 8s in front of Tom Martin of the HBT. Darin Dougal was the 1st home for the Moorfoots. The junior race was equally well supported with 112 under 16's running. A very similar set of runners brought the field home, again dominated by a 16 year old youth, chased home by a 15 year old.

Glentress Races round up including the Tweed Valley Ultra

A gaggle / lots of Moorfoots were involved in the different distance trail races at Glentress over the weekend. First off at 10am on the Saturday were the 235 taking part in the trail half marathon, actually a mile short at 12.1 miles but went all the way up to the mast with 2000 feet of climb and included some technical single track too. The race was won in a time five minutes faster than last year by Stephen Feltbower 1:25:44, and he pushed all the way by ex-Moorfoot James Britton who used to live in Cardrona. Colin Williams was the first Moorfoot in 1.39:33 in seventh – a place higher than last year but a minute slower – also second M40. Tuesday night trainer Amy Alcorn had a cracking run to finish as 4th woman in 1.58.57 and only passed by third place in the descent near the end. Full results here
Next up was the 10k Night Run which started at 5.30pm just as the Scotland Rugby team was getting stuck into the All Blacks at Murrayfield.
Some really good performances here with Darin Dougal taking third overall and first M40 (43:31), Mike McGovern 5th (3rd M40 – 45:10) and Dave Gaffney 18th (49:08) out of the 215 taking part. Full results here
Sunday morning saw the start of the inaugural Tweed Valley Ultras with a sub zero 7.30am start for the 65km/40.5 mile version, with 1574m/ 5164 feet ascent with Alan Elder and Andrew Dancer in action. Again with some stellar performances. Andrew Dancer finished 4th overall (5:53:15 – a very impressive average pace 8:38 min / mile if you consider the distance, terrain and hills!) less than 15 mins behind the winner and only 40 seconds off the podium. Alan Elder earned a very creditable 25th place (7:13:53) and 5th M50, out of the field of 87 finishers. Tweed Valley Ultra 65k Results
The 50km (30 miles) version set off half an hour later at 8am with Lucas Cheskin and Scott MacDonald in action. Both of them set off very fast with the leader and eventual winner Ben Hamilton clocking 6.30 min/mile pace along the flat bike path miles out to Cardrona once the Glentress loop had been negotiated. They were still close together with the leader at Traquair leading up the Southern Upland Way on the Minchmoor climb when Lucas started to cramp and dropped back starting to feel the lack of miles training that injury in the preceding months had restricted. The leader then started to stretch his lead and eventually won the race in a phenomenal 3:46:36. Behind him Scott then started to feel the early fast pace and was increasingly suffering in the flat bike path return stretch from Innerleithen back to Janet’s Brae and had to walk for longer and longer periods to stop cramp. Having been in a very clear second place he was caught with less than 2.5 miles to go and then was passed by another 7 runners as he stumbled along before finishing in 4:47:22 in 9th less than ten minutes behind 2nd place, and was almost caught by Lucas who finished in 4:49:16 (11th). The silver lining was Scott picked up the M50 prize (by virtue of the first M50 getting the 2nd overall prize) and Lucas now has his first ultra under his belt and knows what to expect next time. Tweed Valley Ultra 50k Results


Posted by Colin Williams at 02:05 No comments:

You are all invited for Christmas food and drinks on Tuesday 6 December at 8pm at the County Inn, 35 High Street, Peebles.
All are invited so it would be nice to see you. We had a good time last year and on a week night so it wasn't too raucous. The County has a Christmas menu you can order from with 2 Courses for £14.49 Or 3 Courses for £17.49 or the normal menu which is more reasonable .

For those who go to the club training session on Tuesday nights in Peebles it give just enough time to pop home and get changed.

Cheers
Colin
colin.m.Williams@talk21.com
Posted by Colin Williams at 06:34 No comments:


In near perfect cross-country conditions at Kirkcaldy on Saturday, the Moorfoot Runners U17 Women’s team came away with a fantastic team silver in the National Short Course Cross-Country Championships. On a chilly but sunny and calm day, the terrain was familiar to those who in the past had raced the venue in the Scottish Primary Schools Championships, albeit the undulating and twisting course was set up differently on this occasion. Conditions were on the soft side of good but were perfect for quality running.

Racing over 3km, Charlotte Clare committed to a very positive start, well inside the top ten to half-way, but dropping a couple of places as the fast early pace took its toll. Not quite in her slipstream, but in close contact and having a tremendous run, was Beth Hobbs. Inside the final 200m Charlotte rallied again with her usual stirring finish to pick up a couple of places and crossed the line in 9th place in 11.05. Beth kept on well for 13th in 11.14. That looked to put the Moorfoot girls in a competitive position in the team race (three to count) with a medal chance hinging on how far up the field third counter Mairi Wallace could finish. Mairi was still suffering the effects of the heavy cold which had caused her to miss the Lasswade XC the previous Sunday and was also racing on a course way shorter and less hilly than she prefers. Clearly not firing on all cylinders, Mairi sensibly started steadily and then plugged on to finish 28th of the 56-strong field in a time of 12.06, below her best but still enough to mean an attentive ear being cocked for the announcement calling the podium teams to presentations.

Unfortunately all the cocked Moorfoot ears missed the announcement and it was only after a later visit to check the results that Charlotte and Mairi spied the results and word spread that the team silver had been won. Giffnock North were the runaway winners, with the Moorfoot girls pipping Edinburgh by one single point, 50 to 51. The delighted girls belatedly received their medals from Scottish Athletics Past President Alan Potts, then dashed to the finish to cheer on Laura Muir as she powered her way to victory in the senior women’s race. 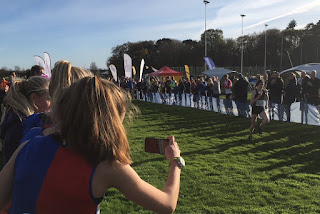 A further bonus for the girls was to be photographed with and congratulated by Laura. Certainly a day to be cherished and a just National XC medal after a couple of years contending for the National Champs proper but missing the required fourth counter.

Earlier in the day, Megan Hobbs and Eilidh Mooney had their own ding-doing battle down the home straight in the U15 2km race. In a field of 81, Megan just got the better of Eilidh with a strong finish for 61st in 8.30 with Eilidh two seconds back in 62nd.

In the U17 Men’s 3km race, Craig Angus had a solid run for 47th of 82 in 10.09, two seconds behind Moorfoot training partner Euan Hood who was the third counter in the Lasswade team which took team silver.

Ailsa Innes was 16th U20 and 50th overall in the senior women’s race and Sophie Collins had another strong run for Edinburgh University Haries finishing 34th in 15.08.
Posted by Gregor at 10:37 No comments:

Big thanks to all who turned out for the Tuesday night training group's Winter Handicap Night Race (headtorches) over the Green MTB trail (3.1Km) at the top of Jenny's Brae.

We had nine runners on the start line, being set off at various intervals based on handicaps derived from race performances during the year, plus a bit of 'guess work'....

First runner home was Iain Roberts, ahead of a fast finishing Alan Elder and Andy Gibson who was tearing through the field from a relative back marker position.

Thanks also to Pete for doing the starting, finishing and timing.

We'll try to schedule in another similar session in the early part of the new year.

Posted by Webmaster at 04:14 No comments:

Beautiful weather greeted those who were at Lauder for the first round of the 2017-18 Borders Cross Country Series today. The series has grown in popularity over the years and there are 430 seniors and 200 juniors with entries to the whole series, with today’s races had 120 juniors and 269 seniors.
The senior race was won by Eoin Lennon from Carnethy, in 25.19, with a huge winning margin on 1 min 41 seconds. The Moorfoots were led home by a strong performance by Darin Dougal.

There were a few running in the Junior Race while most were at Lasswade XC at Gorebridge, led home by a impressive showing from Craig Angus claiming 3rd in his age class and forth overall.


Thanks to Lauderdale Limpers for putting on a great event. 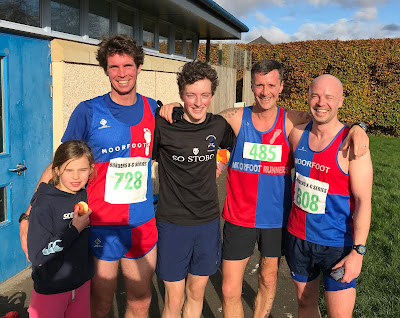 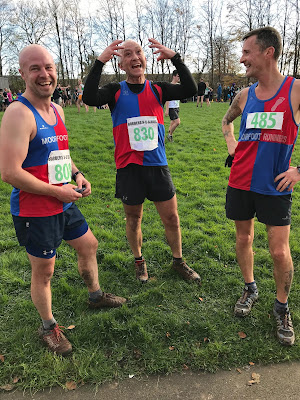 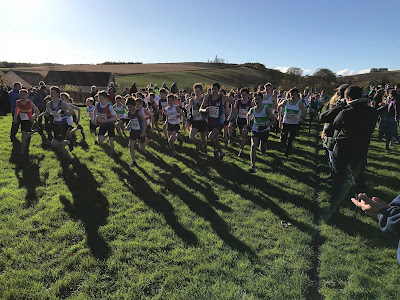 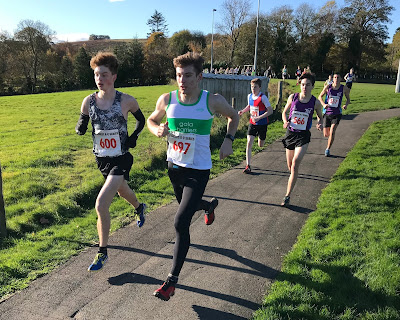 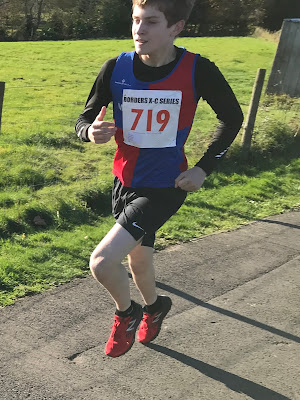 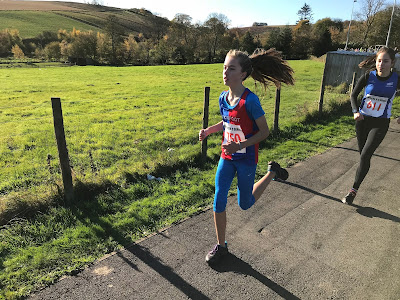 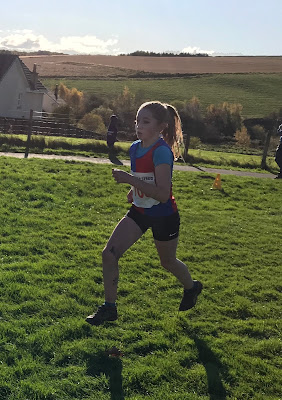 Posted by Colin Williams at 15:00 No comments:

The A 68 may due to be closed next Sunday about 11.00 am which could cause problems for runners coming to the Lauder cross country.
The organisers are asking if all junior and senior runners could please aim to be in Lauder by 10.30-You can register and then watch the display of Tractors raising money for Doddie Weir5's trust going through the village and use our local facilities for a coffee before enjoying our race.
If you are coming from the Tweed Valley then you should miss this out by taking the B6362 the Stow to Lauder road and then parking near the primary school before you hit the A68.
Posted by Colin Williams at 02:32 1 comment: