Scout is now building up to a first go at the Snowdon race on 20 July and is looking to counter the loneliness of the long-distance runner on some of her runs/sessions! Her training plan through to 23 June is on this link.
http://moorfootrunners.co.uk/downloads/scoutrainingplan.pdf
If any of these runs or sessions suit you, even for part of it, then please call her on 01721 729651.

Friday 7-June, starting on Tweed Green as usual. A two lapper this month (1 lap for U16)

If you have entered the series previously, turn up with your number and be ready to start at the first strike ('dong...') at seven on the Parish Church clock. Easy peasy.....

Fancy entering the series this time round - still fantastic value at £10 (£5 for U16) - for the remaining 4 events in the series. Download and complete the entry form in advance and turn up to register from 6:15pm on the night under the north arch of Tweed Bridge.

Coming down to watch and cheer on the runners ? If you can spare 30 mins and are willing to help, we could make use of you as a marshal. Make yourself known at the registration desk and we'll happily use your support.

I was away at the weekend running the Isle of Jura Fell Race on its 40th anniversary.
Almost didn't get there on Thursday as the northerly gale made the short crossing from Islay to Jura hard going for the wee ferry. Friday was pure sunshine and very hot so I enjoyed sussing out the first and trickiest part of the route in case the cloud came down for Saturday.
But Saturday turned out to be perfect conditions, dry and sunny with occasional thin cloud cover and a cooling breeze from the south. Results not on-line yet ( http://www.artxraykishorn.co.uk/juraaspnet/index.aspx ) but I think there were a few records beaten, though the winner Hector Haines (HBT) took 3 hrs 18 min, eleven minutes or so outside the overall record. Jasmin Paris of Carnethy was first lady, possibly beating Angela Mudge's record.
I finished 125th in 5 hrs 11 min 27s, taking more than an hour off my time from three years ago (with no cloud on the hill, navigation wasn't an issue this year). I enjoyed most of it but was too fcuked to enjoy the last of the seven hills. It being the 40th anniversary of the race, it was started by the inspirational Joss Naylor, now in his 80s. Addressing the runners at the start, he urged us to enjoy it all, especially the 3 miles back along the road to the finish. Heeding his words, I walked some of the road and found that to be far more enjoyable.
Cheers.  Russell
Posted by Webmaster at 13:23 No comments:

Scout Adkin was in action in glorious conditions in The Lake District on Saturday batting it out for Scotland against teams from England, Wales and Northern Ireland in the 2013 Senior Home International. The uphill race over 8.7km from Keswick took in 940m of climb to the summit of Skiddaw and doubled as the UK trial for the European Mountain Running Championships in Bulgaria in July with the cream of Britain’s mountain runners in action. In what was her longest ever race ascent, the 19 year-old finished 10th of 21 in the International race in 58mins 46secs behind winner Emma Clayton (England) and she was 2nd in the U23 category to former junior rival Laura Riches (England) with whom she had yo-yoed until losing out in the final push to the summit. Here she is leading Laura around half-way. 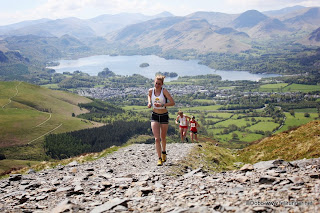 A showery night for this years Gypsy Glen Hill Race - dry as the runners set off, but a heavy shower, lasting most of the race, made it 'cool' on the top.

A win for Ross Campbell of Edinburgh Uni in 32 mins, and a closely fought battle for the remaining 'podium places' between Moorfoot training partners Coxy (33mins)  and Darin (34mins), with Coxy securing this year's bragging rights.
Another win also in the Ladies for Susan Ridley (40mins)

Well done to the 65 runners who took part, and to the marshals and helpers who endured the heavy showers.

Many thanks also to Katrin Engel who photographed the race - view photos on Flickr here
Posted by Webmaster at 01:27 No comments:

Weekend Action - a touch of seconditis

A busy day in the hills on Saturday. Chronologically, first up was Sarah McCormack who was down in the Lake District for the Fairfield Horseshoe which closed early at a max entry of 600. No official results seen yet but Sarah was pleased with her run for 2nd in a quality field behind Victoria Wilkinson and ahead of Helen Fines and Olivia Walwyn, all GB Ints.
The Scottish Athletics Junior Champs were next at Rowardennan on the lower slopes of Ben Lomond. Disappointingly small fields but hey, you've got to be in it to win it. Quite a tough course for the juniors with a mix of the rocky tourist path, some reasonable trails and some tricky off-path rough and boggy sections. In only her second ever hill race Mairi Wallace took silver in the U15 race finishing nearly a minute closer to the Schools XC champ than in her first race on East Lomond two weeks previously. Jacob Adkin looked very strong in the U20 race and also took silver close behind a Helm Hill raider from England with his nearest Scottish rival Andrew Lawler (Law) 48secs back in 3rd. Lucas Cheskin had a much improved run to finish 4th ahead of last week's 3 Bridges winner Luke Foss (also Law). This should pretty much guarantee Jacob's selection for Scotland for the WMRA Youth International in July and Lucas's run might also put him in the mix for consideration.
In the senior Ben Lomond race which followed, Andrew Cox looked to have a good run for 11th in 1.16.44.
Finally, Scout Adkin was up at Glenshee for the Scottish uphill trial on Glas Tullaichean for the senior home international in 2 weeks time and guaranteed her selection with another 2nd place behind HBT's GB orienteer Tess Hill and ahead of Charlotte Morgan (Carnethy).
So four 2nd place finishes on the day but all very pleasing. Well done all.
Posted by Gregor at 05:15 No comments:

I had been running at the Stuc a' Chroin Hill Race. It was a Scottish Championship counter this year so a big field of 206 had entered. I left home in warm, sunshine but the forecast was for cloud and showers in the Trossachs. A heavy shower before the start had some runners nipping back to their cars for extra waterproofs, hats, etc.


The first half of the race was great, I was swapping places with Keith, Kenny and Craig from Teviotdale and all doing fine in the slippery conditions. It was probably raining but I didn't particularly notice. I could feel the strengthening wind at our backs going along the ridge from Ben Each to the climb up to the summit of Stuc. On the climb my legs felt pretty sluggish with the cold wind and sleet chilling the muscles and the Hawick boys took off, only to be seen flying downhill as I neared the top. A lack of feeling in my gloved hands told me it was pretty cold and would be much worse when we turned back into the wind.


It was! I was so cold I could hardly run but I knew I had to keep going or I'd freeze !The marshals around the summit looked frozen too but managed to stay cheerful and were handing out water to all who wanted. On the way back along the ridge the conditions were the toughest I've run in in any hill race. Most of the other runners seemed very cold too and only a few seemed unaffected. Alayne Finlay came skipping down a tricky rocky section as if it was a grassy hillside in summer! I was glad and relieved to reach the point where we turned down into Glen Ample.


This part of the route was really slippery and most folk fall quite a lot. As someone overtaking me joked, it was great fun, just like being drunk but without the hangover! I've always lost places on the long descent into the Glen but this time I lost lots more on the climb back up the other side and on the descent back to the forest. Because of the cold I hadn't felt like drinking so hadn't had any of the juice from my camelback and was short on energy. Realising this and tempting fate, I was thinking that the combination of near-hypothermia and near-hypoglycaemia isn't that bad, when the cramp set in! Oh dear, I wasn't having a good race at all, at all.


Well, the last part along the forest road was a dawdle and the soup at the finish was the most welcome ever. There was obviously a bit of a drama going on in the organisers tent with four police persons outside and some worried conversations involving summit marshals and mountain rescue teams. It says a lot for the organisers that nearly everyone completed the race and everyone got off the hill safely.

Cheers.  Russell
Posted by Webmaster at 05:46 No comments:

A driech, wet night for Race2 of The Bridge Inn First Friday Summer Series - a one lapper this time.

The weather, the fact it was a holiday weekend and a number of runners 'keeping their powder dry' for Sunday's Three Bridges Handicap Race, meant a somewhat depleted field relative to race1.

However, a number of new entrants to the series, so perhaps a big turn out when we get the much discussed 'balmy summers evening'....

Thanks again to all runners and marshalls/supporters who helped out...

Event number #2 this Friday (3-May-2013) in The Bridge Inn First Friday Summer Series - it's a fast and furious 1 lapper for everyone this time....
All the details on our Moorfoot website page
http://www.moorfootrunners.co.uk/BridgeInn_SummerSeries.html

Previous Runners from Event#1
Easy-peasy, turn up with your number from the last race and be on the start line before 7:00pm
No further registration or fuss - get a good warm up and get ready to set a PB !

New Entrants
Five races for a tenner - has to be best value event in town !
Download an entry form, fill it in and have your £10 (seniors) or £5 (U16) with you on the night - register under the North arch of the Tweed Bridge between 6:15pm and 6:45pm
(Again, please note you help us considerably if you have a completed entry form and exact fee prepared and with you when you turn up to register - thank you !)

Spectators
Many hands make light work - down to support the family or friends ? - fancy spectating from a different view point and do a short stint as a marshall ?
Contact this months race organiser (kenny.davidsonATbtinternet.com or 01721 723200) and we'll put you to use....
Don't worry, you will be finished by 7:30pm at the latest....it is a very short stint!

See you on Friday !

Forecast for Friday ?
The north wind doth blow and we shall have....surely not!

Posted by Webmaster at 03:18 No comments: