I imagined that there was little likelihood of making the final entry list for this island epic. Perhaps this is why I attempted again to enter - a week before race day – partly hoping it wouldn’t happen? However, the organiser got back to say it wasn’t too late and that the 'situation was clarifying'. All that was needed was my SI number, qualifying experiences and a couple of emails later, I had paid and I was on the list. Part of me bore a light grin while the other needed to lie down in a darkened room and consider what lay ahead.

I ran the route last year and could remember some of the difficult sections (too many to remember if I was honest) those gargantuan climbs, people-eating bogs, near-vertical boulder fields, hillsides swathed in scree, the quad crushing downhills, the ankle-breaking run to the three-arched bridge and then the three-mile trudge to the Jura Distillery.

Memory, strangely, can retain a variety of aspects of an experience, like how something looked or smelled or tasted, but for me, it fails to retain just how painful something was. Much as I remember the previous year’s run, at times, being a packed shed of agony - I couldn’t bring it back to quantify.
However, I’d paid my £20, so I was in!

The journey north starts at 5.30 from Peebles and by 9.15 I am in Tayvallich for the 10.00 fast boat to Craighouse on Jura. There’s a young bag-piper, piping runners on to the boat in order to raise funds for his orienteering trip to Sweden – really setting the scene! He will stop when the boat leaves. The boat is delayed and Sandy (the boat guy) jokes that he intends staying there – ‘just to see how long it takes before the lad keels over’. 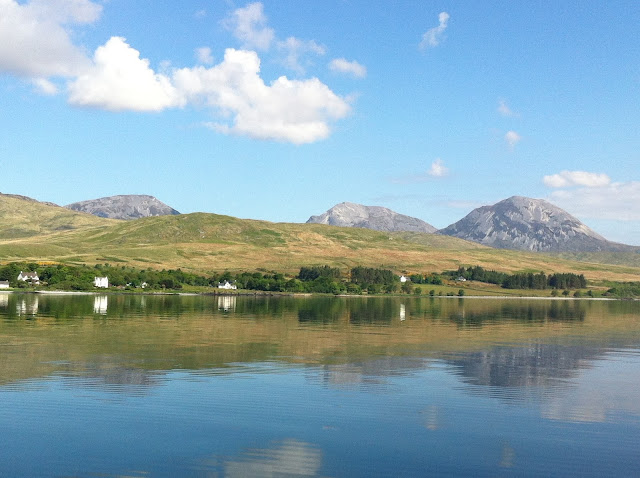 It’s a smooth crossing and a short walk to the campsite. Coming off the early boat means that there are only five or six pitches taken. Last year, I learned that the shop near the campsite is NOT a campsite shop and does not sell bedrolls – this year I have brought a super-luxury inflatable mattress as an alternative to last year’s sleeping on cardboard boxes and bubblewrap – good call! I have also brought a cold – bad call! But double doses of Lemsip Max keep it stable. 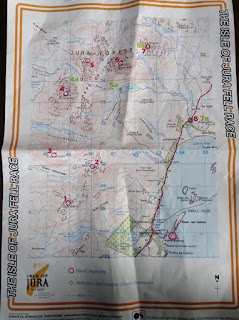 Tent up, bed inflated, smug with self, I head for lunch at the Jura hotel. Two minutes to twelve and I’m the first customer of the day. I eat and drink and plan a recce run up the first section – just to see what lies ahead. With the 5.00 am rise, by 1.30pm, I have fallen asleep on my SLIM (Super Luxury Inflatable Mattress) Later, I am dressed and off for the recce. The waist-deep bogs are still there but it is dry on the tracks further up. I run half way to the first checkpoint and back. In the evening, I head back to the hotel for more food and I notice many runners drinking ales. I enquire. I am informed that Guinness is the best option as it is a foodstuff. I have three and leave.

The next morning there is a buzz about the campsite. Kit is organised, banter flies, carbs are ingested as pots and pans clatter. Its’ a fine morning and it looks clear higher up.

The start nears and we are herded into the pen. After the customary, inaudible, safety instructions -we are off. I pick a steady pace (mainly as that is all I can manage) and feel good at the top of Dubh Bheinn. I am picked off on the uphill of Glas Bheinn but I gain on the way down to the base of Aonach Bheinn. It’s an incredible view over the valley to Beinn a’ Chaolais. I make my way down the steep path of heather and peat and manage to stay on my feet despite the severe angle of the slope. I meet Krysia from Carnethy - we top up bottles at the burn and are off on the ascent of Beinn a’ Chaolais. It’s tough but I am eventually over and count off, mentally, hill number 1.

On the ascent of Bienn an Oir, I start to struggle. My legs work fine. No imploding of calves or dead quads or diminished breathing but I have no energy to draw on. I chomp and energy bar and drink as I go - but probably too late. From the cairn at the top (centre of the middle hill in the pic below) of Bienn an Oir, things don’t improve. I follow a brace of Westies who run way off to the left rather than coming down the central line from the middle of the hill. I then decide they were going too far off course and I cut though the heather over a boulder field and on to the flatter section before the climb of final pap. Marshalls offer more fluids – the last of the tap water I am told and I head off. This is the point where severe cramps set in last year. No cramps – but very little energy to keep going forward. On the final section of Beinn Shiantaidh, below, I meet Andy Skelhorn from Macclesfield Harriers who snaps me on my way to the top. What can’t be seen here is my system shouting out for food and water! 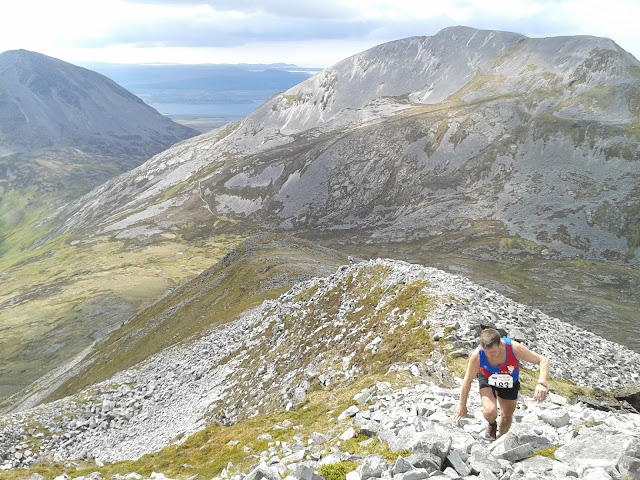 Eventually, I am over the top and on to the nasty scree slope where the path has all but disappeared and guess work is the order of the day. I meet a Deeside Lady runner and between us we find the tricky trod that cuts across the hill to the final ‘wee hill’ Corra Beinn. I take a leftward tack and claw my way to the final cairn. Famished and dry, I plod on to the Three Arched Bridge. This section is ankle-busting bog and tussock country. I walk the bogs and run the dry sections and after a dip at the river crossing, a quick isotonic drink at the bridge, I ‘only’ have the 3.3 miles of road to run.

This is a real challenge as there is very little in me to provide the required energy. It’s hot and I decide to make occasional fast walks where shade becomes available. I manage the final half mile in one go – probably because of the crowds. I finish off with a final burst to the line. I then grab 2 cups of water and find shade in which to consume them. I consume 4 further cups – brought to me by people nearby - I must have looked quite ruined as one of them also took my shoes and sock off for me. Thank you kind stranger!

Soon, I head for my tent for nourishment in the form of a large bag of salted cashews I had saved. I lie on my SLIM and scoff. I fall asleep briefly and wake to find myself covered in the remainder of the cashews. I need food, I desire Guinness so I make my way to the hotel and gorge. I follow this with a shower.

I return to the bar to work on fluid replacement. I meet part of Shettleston Harriers' International Team (SHIT), Alastair Pringle, Bill Breckenridge, and his son Jock. We have numerous ales – probably outdone slightly but the celebrating Jebb family at the next table. Robert was 8th (first MV40) and Andrew 16th.

Fluid replacement goes well and I head for my tent. Next morning, it's bacon rolls and off on the 9.30 boat to Tayvallich. A glorious morning - it makes it hard to depart. On leaving, I ask myself the question – will I do it next year? On the way up the last hill, where I felt utterly drained, I said to myself - ‘remember how this feels’ – Don’t do it again!

That said, it’s four days later and I can still smell the salty air, the burned heather and taste that first post-race Guinness. I do, however, seem to have forgotten just how painful it all was!

I was bringing up the rear but managed to take around 4 mins off last year's time.